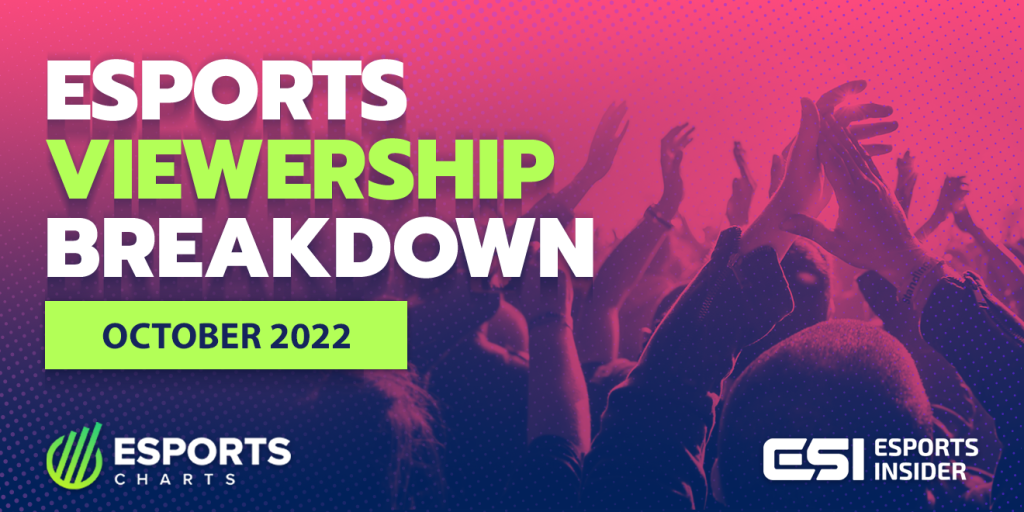 Each month Esports Insider, in collaboration with Esports Charts, delves into esports viewership statistics to decipher what audiences are currently watching.

October was an incredibly interesting month when it came to viewership, largely because there were multiple global events taking place across Dota 2, CS:GO and League of Legends. Whilst some of these events only conclude in November, their presence has still made a mark in this month’s viewership chart.

Placing fifth on esports charts’ peak viewership list for the month of October is CS:GO’s IEM Rio Major 2022. Despite the fact the competition is still ongoing, IEM Rio Major’s Challenger Stage, the first of the tournament’s three stages, recorded 751,557 peak viewers. The most popular individual CS:GO clash in October was an IEM Rio match between Team Vitality and Imperial Esports, which garnered 698,222 viewers.

It’s not surprising to see a match-up between Europe’s Team Vitality and  Brazil’s Imperial Esports do so well. So far, Team Vitality, as one of the best CS:GO teams, has recorded the most hours watched for the competition (8.02m).

Meanwhile, Imperial Esports, as a crowd favourite thanks to its popular Brazilian lineup, has the second-highest average viewership at IEM Rio Major, recording around 509,000. The team in first place is NAVI, garnering an average audience of 545,000. 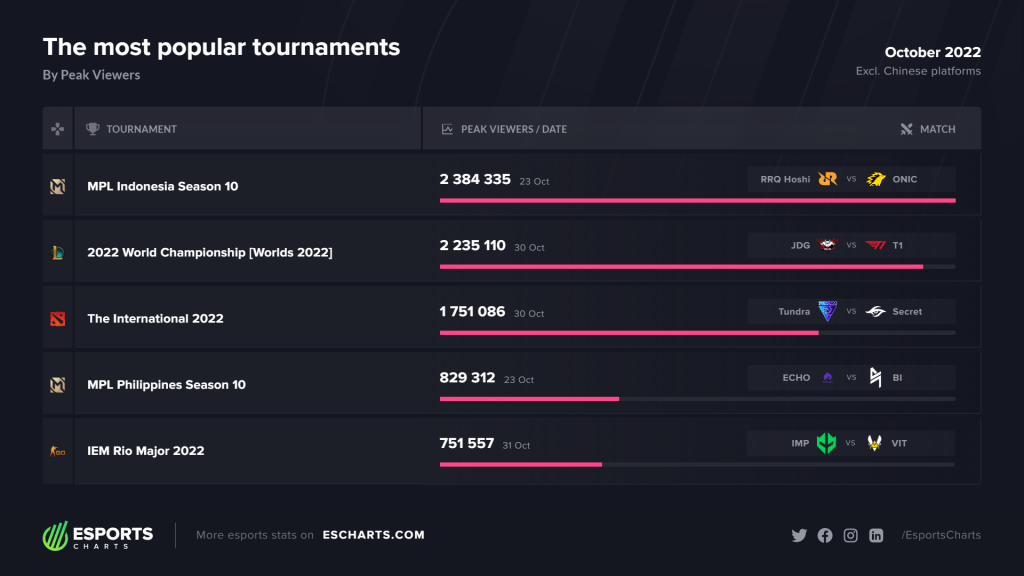 Since the Challenger Stage, the competition has gone from strength to strength, even reaching the 1m viewership mark, according to Esports Charts. With the competition nearing its conclusion, eyes will be on whether the event can challenge previous CS:GO viewership records set by PGL Major Stockholm 2021 (2.7m) and PGL Major Antwerp 2022 (2.1m) — the two most popular CS:GO events ever.

Despite The International 2022 suffering a viewership from its previous edition, the event still managed to draw a peak viewership figure of 1.75m — making it the third most viewed Dota 2 event ever and third on this month’s viewership chart.

The final clash between Tundra Esports and Team Secret was the most viewed match-up of the competition, with the latter team recording the most hours watched out of every organisation (17.68m hours in total). Overall, the tournament, from a viewership perspective, is a mixed bag. On one hand, it is the third most watched Dota 2 event ever, however it failed to beat 2021 and 2019’s editions — albeit the peak viewership was only down 200,000 from TI9. 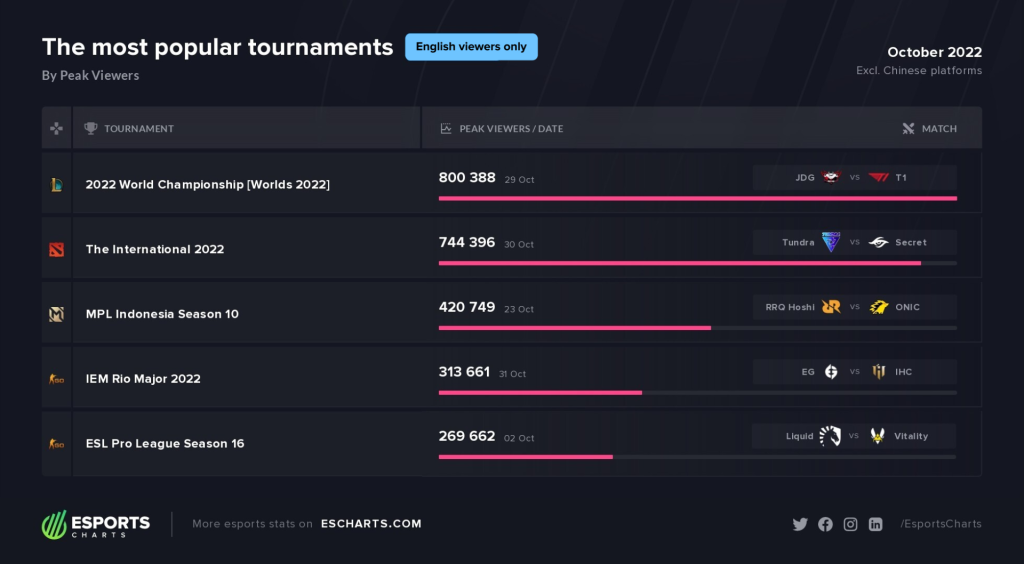 Overall, while these viewership figures aren’t ideal for Dota 2’s premier event of the year, it’s certainly not panic stations when you compare it to previous events.

Did time zones affect the League of Legends World Championships 2022?

The headlines this month are about the 2022 League of Legends World Championship blasting viewership records, recording over 5m peak viewers overall. However, in October, the event finished second on the viewership charts, totalling 2.23m peak viewers.

The most popular Words 2022 match was the semi-final matchup between Korean organisation T1 and Chinese team JDG Gaming. It’s worth noting that due to the unreliability of data from Chinese streaming platforms Esports Charts does not record these statistics. As a result, it’s almost guaranteed that League of Legends’ viewership was significantly higher in reality.

According to Esports Charts, this is the lowest semi-final peak viewership when looking at the previous three editions. This may be attributed to the matches taking place at unfavourable times for Asian and European audiences — arguably League of Legends’ two biggest audiences.

Nevertheless, the viewership is a testament to Riot Games’ finals event, which featured performances from Lil Nas X and Jackson Wang, as well as an exciting five games series. Overall, the League of Legends event continues to highlight Riot Games’ dominance within the esports space — both for October and November.

With two entries on Esports Charts’ viewership list, Mobile Legends Bang Bangs’ regional powerhouses continue to make an impact. With both its Indonesia and Philippines leagues concluding, it’s no longer necessarily a surprise to see the competitions on the list. 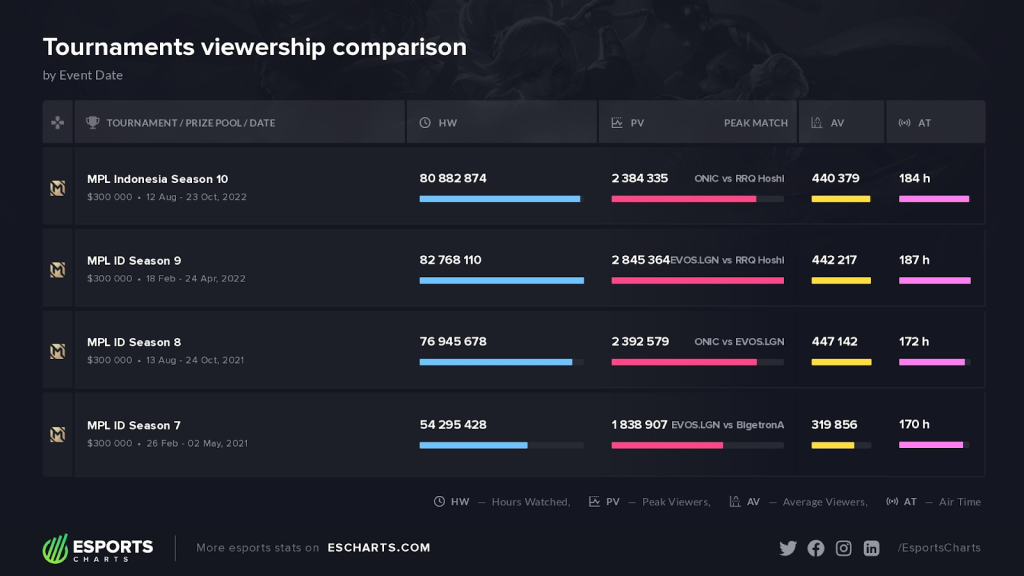 As is expected, the tournament’s viewership largely came from Tagalog-speaking platforms (a widely-spoken language within the Philippines). However, the event also managed to garner 146,400 peak viewers.

MPL Indonesia’s season ultimately claimed the top spot as the most popular esports event in October, recording 2.38m viewers. The regional league became the sixth most popular MLBB event, with the finals between ONIC and RRQ Hoshi being the highest-viewed matchup.

Despite the impressive figures, this is down from MPL Season 9’s 2.85m viewers — however, this was the league’s most popular event ever.

Overall, MPL Season 10 is currently the fourth most popular esports event of 2022 so far, with the League of Legends Worlds Championship the only non-MLBB event above the competition.

Can any event beat League of Legends Worlds in 2022?

Speaking of League of Legends, with the year coming to a close eyes are starting to turn to the end-of-year viewership list. Currently, World 2022 is the most popular event of 2022, but will it remain that way?

The IEM Rio Major 2022 has yet to conclude, however it seems unlikely that the event will beat the 5m benchmark. Mobile Legends Bang Bang is League of Legends’ closest competitor, though the M4 World Championship — MLBB’s own season-ending event — is actually taking place in January 2023, not in December like last year’s edition. With all this in mind, it seems that League of Legends may take the top spot for 2022, a title it failed to claim in 2021 due to the Free Fire World Series.