Typically, one you think of the Papa Roach smash hit last resort, your mind likely travels back the glossy and highly-stylized vibes of nu-metal and associated acts. The drama was in the vocals, you know? Well, singer Emma Zander has taken the hard rocking cut and turned int into an soft piano anthem, complete with a full-on Lynchian dramatization in the accompanying video. You can check it out above. The track is featured on the soundtrack to the film I’m Totally Fine, directed by Brandon Dermer, who also directed the video and has previously worked with Panic! At The Disco.

To be honest, I’ve never thought too deeply about this song, so I’m still digesting everything Zander has got going on here, but the singer herself posted to social media to discuss the evolution of her version.

“My cover of @paparoach’s “Last Resort” is out everywhere now!!!!! When @kayhan.mp3 reached out to me about covering this iconic rock anthem for his friend’s movie, it was an immediate YES. He sent along the BEAUTIFUL instrumental he created, & the rest is history. It’s such a pleasure to be a part of @brandondermer’s poignant & hilarious film, #ImTotallyFine, which drops in theaters TODAY!!! Brandon poured his heart & soul into this film, & I’m so proud to be a part of the journey. I never expected to cover this badass song — and I REALLY never expected the support I’ve received from @paparoach, @jacobyshaddix, & the whole Papa team. I’m so endlessly grateful. ☺️Thank you @itsbretjames for a killer mix! Everyone, go stream & scream along !!!! And watch out for a video coming your way soon”

The coolest thing about this cover, though? It seems like the dudes in Papa Roach were fans of the track. 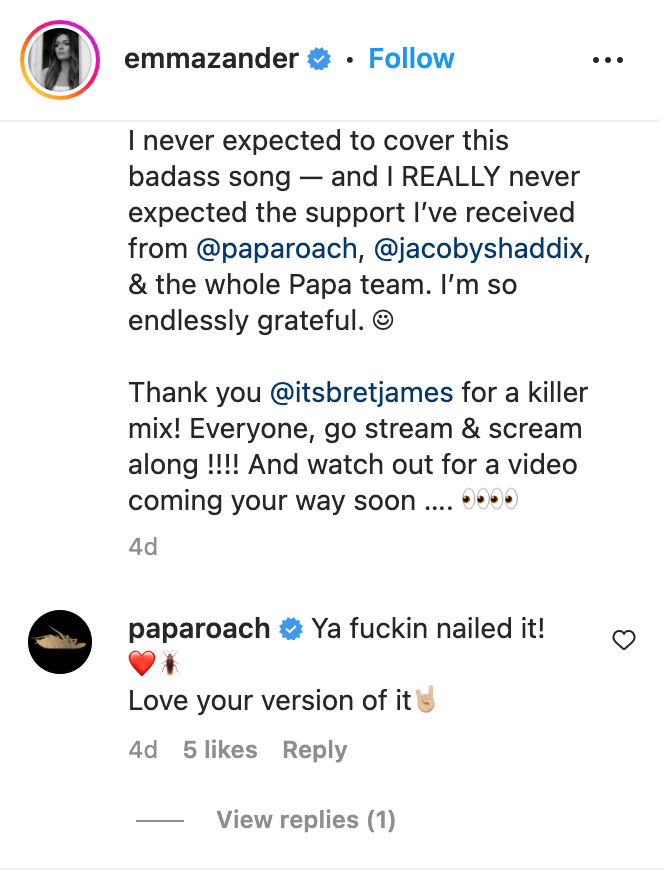 Someone Broke Into TOMMY LEE’s House & Stole Some Cabinet Handles